Our latest creation ‘SiX’ is a transmedia project which brings together the world of fashion film, interactive web experiences and electronic music. The main idea is to give the viewer possibility to interact and be part of the story. 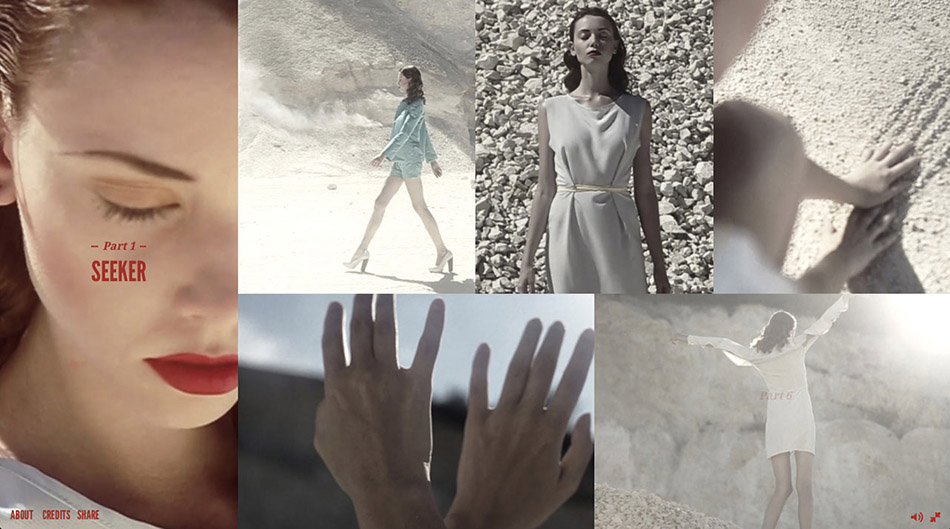 Experience the film from your desktop browser

The film was shot at a quarry near Budapest, Hungary on the summer of 2013. Web experts Ginrin joined the project to bring the videos alive on an online platform along with music producer Imre Kiss who got deeply inspired by the mood.

The title ‘SiX’ refers to the fact that it is the sixth project from The Inspiration Theory containing six parts. The different meanings of the number 6 were used as the titles for these short stories.

A few words from the creators of the project:

Tamas Olajos – creative director, cinematographer // The Inspiration Theory
“After several months of hard work we finished a project, where programming is also an art from apart from film, music, design and fashion design. I feel lucky that I had the opportunity to work with people who were motivated by the passion of creating and using modern technologies. SiX is our first transmedia project, but definitely not the last.”

Ferenc Csabay / CSF – art director, fashion designer // The Inspiration Theory
“At the time we were shooting “SiX” we already felt it can be more than a simple fashion film. The lights, the colors, the model’s professional movements, everything just worked. We are glad that web developer team Ginrin joined the project and gave the possibility of interaction to the video. I hope that the six parts give back the same mood to the viewers that we felt at the quarry while we were filming with the CSF SS14 collection.”

Attila Sztankovics – art director // Ginrin
“When Tamas asked me to join the project it all felt really exciting. It’s never easy to collaborate with people from different fields and set everything in harmony. Like the rest of the team I also wanted to give my best knowledge to the project. The most important aspects of the web interface were that it shouldn’t be too conspicuous and distracting, but to be the tool of interaction only.”

Laszlo Timari – lead developer // Ginrin
“I love innovative solutions. The front-end programming of SiX was different than my daily routines and tasks. It was very exiting to put the last bits of codes to their right places so the interaction works just the way we planned. It wasn’t an easy job, but looking at a model for these long months of programming wasn’t too bad

Imre Kiss – music producer
“The project was a great challenge since I’ve been always interested in multimedia. It gave me a good opportunity to compose music and sounds for moving images. It was also a pleasure to work with so many creative and talented people.”